Memorable Encounter with Lady Liberty: An Iconic Symbol Of Our Country

Reposting this blog that I wrote shortly after the Boston Marathon terror attack on April 15, 2013 because it is so relevant to the events happening today.....Over 260 people were maimed, and 3 were killed with a pair of homemade bombs during that awful day. If I was one of the victims I would not be happy with what the courts have done this week with the sentence of the remaining bomber. Reading the words of survivor Rebekah Gregory, who lost a leg in the attack, or Adrianne Haslet, a professional dancer who lost her leg too will make anyone upset. She and others are still suffering...SEVEN years.

My ancestors worked hard to leave the oppression and socialism of Italy to find a new home filled with opportunity for themselves in this great Republic, and for their offsprings. I have benefited greatly from my opportunity to be born in the US, and I thank them for their suffering and sacrifice so that I could have the life that I have. My grandfather worked for over 30 years as a coal miner, my father the same as a a brick layer and I have owned my own commercial photography business for over 30 years.

This is part of their story....

It was Thursday, Christmas Eve, a long time ago, when my twenty three year old grandfather “Nonno Carmelo” first saw her. Having left the port of Naples, Italy a week earlier on the ship Madonna; he and the other 954 passengers disembarked onto Ellis Island. The weather was warmer, with a chance of rain and snow arriving the following day, but I'm sure he didn't care for he was walking on  “His Land of Opportunity.” His solitary journey was beginning as he spent the next 6 years preparing for my grandmother to join him. 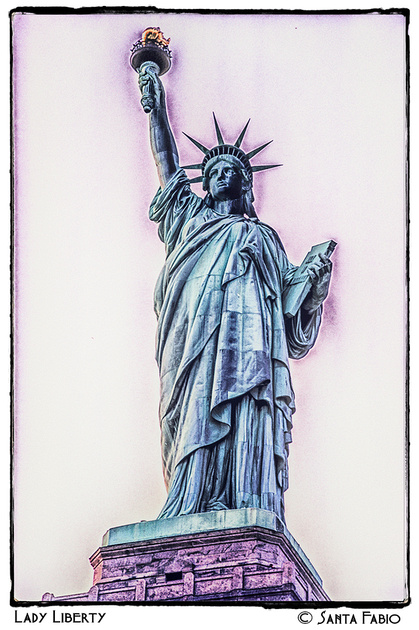 With rain and snow, during the first Saturday, of the third day, of the new year, the ship Adriatic brought 626 souls and my twenty six year old Nonna Santa, along with two of her children. Scouring the records of Ellis Island I have been able to find the manifest lines where they were recorded. I’m thankful that officials did not “Americanize” their names, although they did not spell the name of their town correctly.

The photograph that most likely depicts what my grandparents went through would probably be the famous image called: “The Steerage” taken in 1907 by Alfred Stieglitz. In that photograph you see the evocative, weathered, faces of immigrants, many poor who were looking for a better life in America. I am taken with the sheer number of hearty souls that line the decks of the ship. Women wearing long dresses and head coverings carrying babies; laundry on clotheslines; the men with their Gents Straw boater hats, and the workingmen with their cloth caps on. Any one of those people could have been a relative.

The Ellis Island (opened in 1892 as a federal immigration station and closed in 1954)  archive of additional photographs I've seen of the immigrants, help legitimize what Stieglitz saw. For what ever reason, these people came to America to make a better life for themselves and their families. That is what both my grandfather and father did. This statue, this iconic hammered copper lady, holding her torch high, remains an enduring symbol of what we all hold dear in our hearts. It means freedom from oppression and the hope of democracy and prosperity. It is one of the world's most recognizable landmarks, and I visit her every time I'm in New York.  I can only imagine what my grandparents must have thought as they approached it looming in New York Harbor.

On a clear, warm, August morning in 2000, I had the privilege of taking a kayak across the Hudson River (dodging the Staten Island Ferry's) to see the Copper Goddess. As I sat inches above the water looking at her majestic beauty, because of it's importance in my family's history, it brought tears to my eyes. Thirteen months later New York history would change forever.

Figures say that some 12 million immigrants were processed at Ellis Island before being granted permission to enter the US and I'm glad to have had family be a few of those millions. Unless you are of Native blood, or came over on the Mayflower, chances are your grandparents or great grandparents saw this very same site.

This famous passage may have been part of a fundraising contest, but these words that are on a plaque at the entrance to the statue's pedestal are so appropriate to our country and it's founding fathers. Without their wisdom and perseverance we would not live with the freedom we have. This is a freedom we all must protect.

"Give me your tired, your poor/Your huddled masses yearning to breathe free/The wretched refuse of your teeming shore/Send these, the homeless, tempest-lost to me I lift my lamp beside the golden door!"

Those who do not subscribe to this sentiment should never venture onto our shores or leave.

B Strong and Be Strong America.

We are the land of the free and the home of the brave.

These copyrighted photographs are from my archives on one of my many visits to New York.

Note: The Library of Congress has all kinds of newspapers for you to browse.

(www.loc.gov) I found the pages of New York at (http://chroniclingamerica.loc.gov)

Ellis Island records can be found at:

All Photos taken with Nikon F 100.