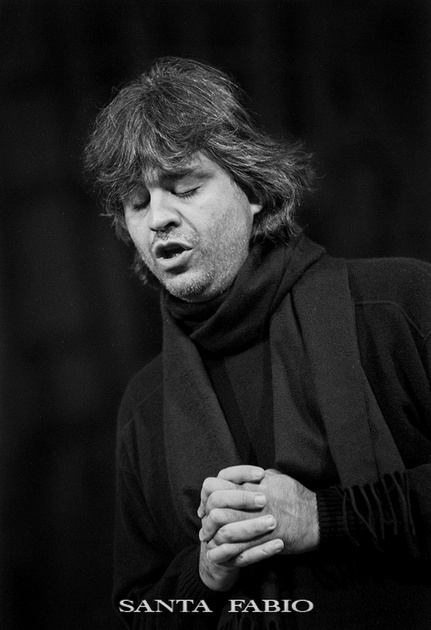 This horrific virus has impacted and changed so many of our lives. For better or for worse, I'm not sure anyone will look at their existence the same after this. Since March 5th, all of my scheduled assignments have been cancelled, and I've taken this as a blessing. I have been revisiting all of my old photography assignments and removing from my archive all the "non-essential" jobs that no longer need to be a part of my archive.

Which is why I've written this post. It was the fall of 1999 and Andrea Bocelli's voice and face were becoming known to the world, and I was given the assignment to photograph him, during rehearsals at the Detroit Opera House, in his North American Opera debut of "Werther". The 41 year-old singer was in front of me and I couldn't have been happier.

I was only allowed to photograph during rehearsal from the audience, but during a break I was able to sit next to him as he played the piano. Never having photographed a non-sighted person before, I used this opportunity to introduce myself and speak to him for a few moments. He even was gracious enough to meet my children backstage before his performance. My only wish was the opera was in Italian instead of French. I love opera and my knowledge of the Italian language makes it so enjoyable. (My French is not so great!)

My career has spanned a few decades with most of it in Detroit. When I look upon the images that I've taken, I am thrown back to that very moment. My philosophy has always been that it doesn't matter who is in front of my camera for I will do my best to create the best image of that person.

When we are able to move about the city, I hope to continue creating images for my clients. Let's pray the virus will be gone soon.