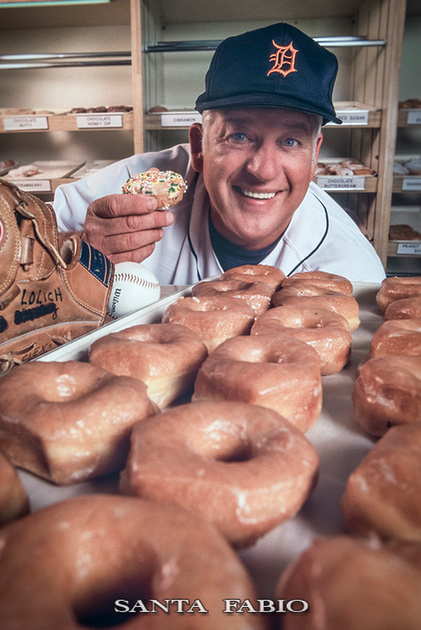 Twice I've met this man and had the privilege of photographing him for different editorial publications, and every time, the first thing I noticed were the massive size of his hands. They literally engulfed mine. It is easy to see why former Detroit Tigers left-handed pitcher, Mickey Lolich held the teams record for strikeouts (2679) from 1963 - 1975 until Justin Verlander pulled ahead.

Baseball is my favorite sport to watch and I must thank the sisters at my parochial elementary school, who during the 1968 World Series rolled TV's, on large gray metal carts, into the classroom so we could watch the televised games! I was just a young child, but the thrill of watching Mr. Lolich pitch and the Tigers win the World Series cemented my love for the game. My parents did not have the disposable income to go to a game, so I had to wait and save up enough babysitting money so I could see a game at Tiger Stadium when I was a teenager. I still have my baseball program from that game with "Mr. Tiger" right fielder, #6, Al Kaline on the cover. Tiger Stadium, situated in Corktown neigborhood, stood there for 87 years at the "Corner" of Michigan and Trumbell avenues before relocating to Comerica Park on Woodward Avenue.

Fast forward a few years, when I was blessed to receive an internship at the Detroit News. I had already been photographing sports for two years at a small local newspaper, but I was pretty bad at it. A truly kind and gracious man named Drayton "Doc" Holcomb took me under his wing and taught me how to shoot baseball at Tiger Stadium. He is considered one of the truly great sports photographers in Detroit and I soaked up all the knowledge I could. I was in awe as I walked in the footsteps of Detroit's great baseball legends and was able to take images from near the dugout. Those were some amazing evenings at the ball park! Little did I know that I would be a sports and editorial photographer for the next 10 years shooting not only baseball but every professional sport imaginable. It is because of Doc's knowledge and graciousness that I succeeded.

When I made the switch from journalism to corporate photography, I went from sporting events to making environmental portraits of sports figures away from the ball parks, which is how I met the former Detroit Tigers pitcher Mickey Lolich at the donut shop he owned with his wife in the suburbs. Going through my archives is bringing back so many memories, and had I been able to write blogs back in the 90's I would have written about meeting Mr. Lolich. As a professional photographer I feel fortunate that after more than 20 years I was able to meet one of the people who was responsible for my love of baseball, and eat some amazing donuts!

This virus so far has taken away my spring and summer time sport event to go to. At every charity event my husband and I always bid on every Tiger game we can, which has been fun and exciting. We've seen some amazing games, and even had the opportunity to snag a foul ball.

In closing, as a child I would watch as many baseball games I could on TV, but since I am a cord cutter, now I can only watch games at the ball park. Wouldn't it be nice if we could still watch baseball games on TV? Miss my Tigers!