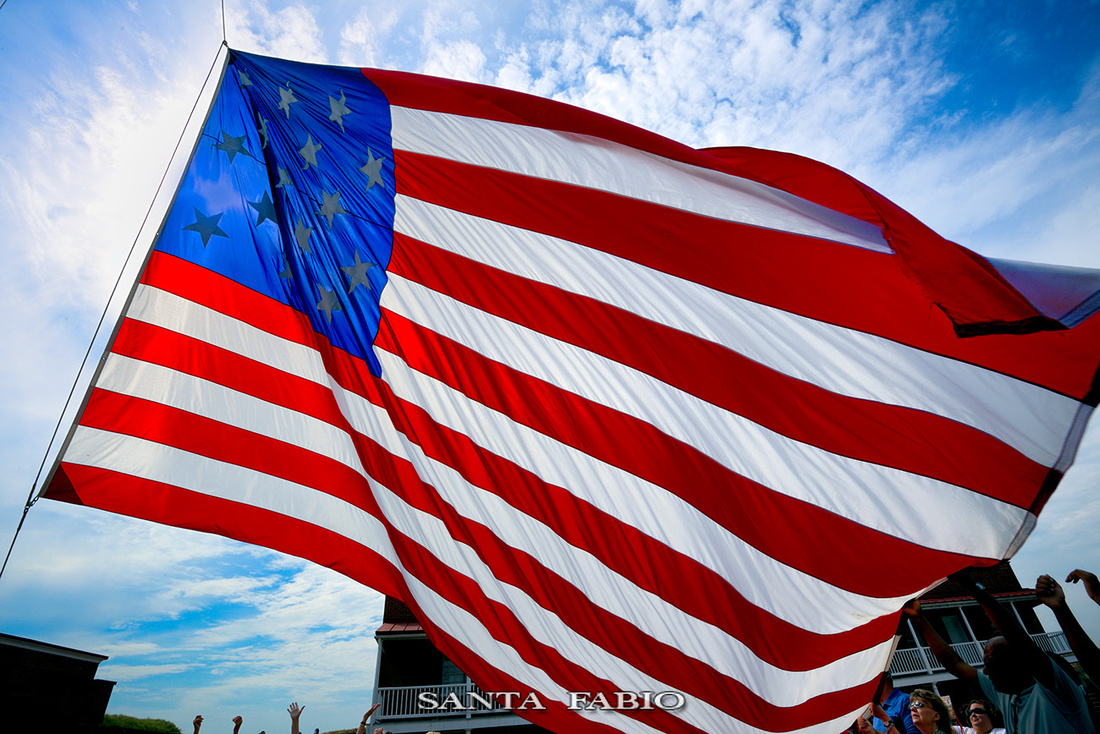 I had the privilege of visiting Ft. McHenry National Monument & Historical Shrine, near Baltimore, on Independence Day 2017. Along with dozens of other people, we helped hoist a replica of "Old Glory" that morning and watch it wave in the wind, high above the fort. It was a very moving moment on what this flag has meant to my immigrant family, and what it should mean to every person in this country we call home.

Ft. McHenry is best known for its role in the War of 1812, when it successfully defended Baltimore harbor from an attack by the British navy from the Chesapeake Bay on September 13–14, 1814.

During the War of 1812 an American storm flag, 17 by 25 feet, was flown over Fort McHenry during the bombardment. It was replaced early on the morning of September 14, 1814 with a larger American garrison flag, 30 by 42 feet. The larger flag signaled American victory over the British in the Battle of Baltimore. The sight of the ensign inspired Francis Scott Key to write the poem "Defense of Fort M'Henry" that was later set and became known as "The Star-Spangled Banner" which is the NATIONAL ANTHEM of the United States.

There is a dispute on whether or not Betsy Ross had sewn the first flag. The family of Rebecca Young claimed that she was the one who sewed the first flag. Young's daughter was Mary Pickersgill, who made the Star-Spangled Banner Flag. She was assisted by Grace Wisher, an African American girl who was 13 years old.

Over the years, many interpretations have surfaced about what our flags colors have meant, and have included that red is for the blood of patriots, spilled in the fight to protect the country. In addition, according to custom and tradition, white signifies purity and innocence; red, hardiness and valor; and blue signifies vigilance, perseverance, and justice. My favorite is the one president Ronald Regan gave in his 1986 speech. He said, "The colors of our flag signify the qualities of the human spirit we Americans cherish. Red for courage and readiness to sacrifice; white for pure intentions and high ideals; and blue for vigilance and justice." - Wikipedia

To me, our flag represents freedom, dignity and the true meaning of being an American.
Fly her proudly and respectfully, for this is the greatest country in the world.